Last Chance to See! ‘The Court Must Have a Queen’ is on until Sept 2nd, featuring Black Tudor John Blanke, an African trumpeter. It has its last 12 performances this Thurs-Sunday at Hampton Court Palace.

It’s being performed in the Great Hall at  the Palace, where #Shakespeare’s Kings Men performed in 1603. It also features music by Henry V111th.  It’s the summer of 1539 and Henry VIII is looking for a fourth wife after the death of his beloved Jane Seymour. Join the court as Thomas Cromwell oversees the finishing touches to a feast he hopes will seal the marriage treaty between Henry and Anne of Cleves. 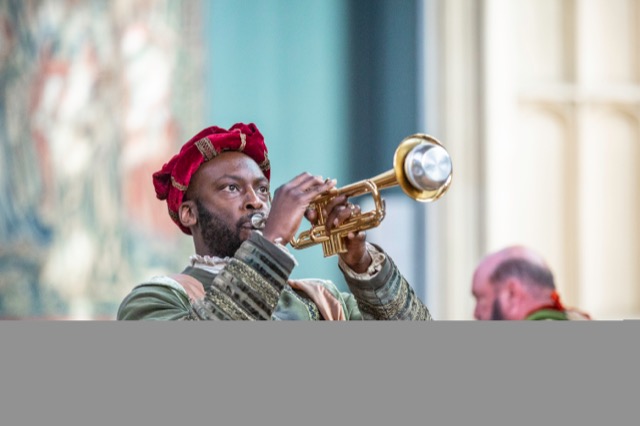 A sumptuous feast is being prepared for Henry V111’s fourth marriage to Anne of Cleves. But with a moody, bereaved King anxious about the proposed union, Cromwell’s day is not going according to plan. Will the return of one of the King’s favourite musicians, African trumpeter John Blanke, save the day…?

The play features amazing #Tudor costumes and wonderful #period music.  Specially commissioned by Historic Royal Palaces, it  also  celebrates the re-opening of Henry VIII’s famous kitchens at Hampton Court and explores the fascinating history of banqueting at the palace.  More info/book at:  https://www.hrp.org.uk/hampton-court-palace/explore/the-court-must-have-a-queen/#gs.Ll4TkVM

Meet the Cast of Alice at Brixton House: Alice in Wonderland fused with a little bit of Hip Hop