Winsome Pinnock is “probably Britain’s most well known black female playwright”.  In 2018 she revived her 1987 play Leave Taking at the Bush Theatre with a successful  run, it was the first play to be staged at the National Theatre that was written by a black woman.

Winning the award was great because I’d had quite a long break from theatre and had no idea if I would be able to pick up my writing career where I’d left off.   It is always wonderful to have a play produced because you know how difficult it is for such a thing to happen.  Theatres have limited resources and they can’t produce every play they receive.  This is a big play and that makes it even harder to get a production, so I’m more than happy that The Royal Exchange in Manchester decided to do it.  I have the usual mix of excitement and nervousness that you get as you approach the opening of a play. 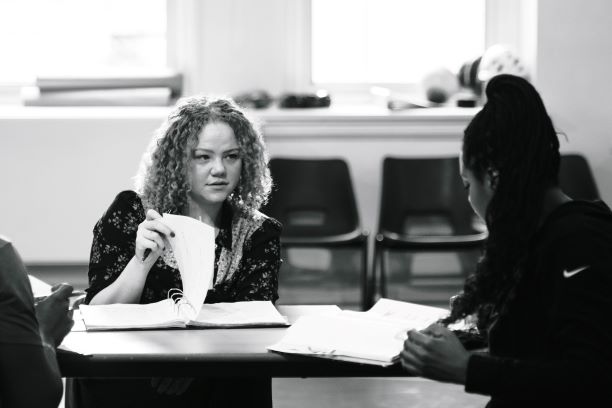 I get so immersed in the writing process that over time I tend to forget what originally compelled me to write the play.  However, a couple of things that inspired me were a) my mother dying.  I went through a bit of an identity crisis when she passed.  I hadn’t thought too much about my family’s historical connection with the UK beyond Windrush, but when she died, I started to feel the physical presence of history.  I started to realise that her language was loaded with references to our history of enslavement and it felt like the right time to start to think about that history more deeply. b) Turner’s painting The Slave Ship.  It’s a very complex response to the subject of enslavement, one that both owns and resists culpability.  Well, I find that really interesting.

It’s so weird that people say “another slave play” because when I investigated it, I discovered that there are very few plays by black British writers on this subject. At least very few that have been produced.  Most of the plays that touch on this subject and which have received productions in the UK are by African American playwrights.  I would say that Rockets and Blue Lights is definitely not “another slave story” I really wanted to make sure that it wasn’t, and I hope that people will be engaged and surprised by the play.  In any case it is as much a play about our times as it is a historical one.   I wanted there to be a conversation between past and present.  Also, the play takes place after abolition so technically isn’t “another slave play”.  It is important that we talk about it because, hard as it is for some people to believe, we are still living with the consequences of the slave trade.

The title comes from a painting that JMW Turner produced in 1840, the same year that he exhibited his astounding painting The Slave Ship.  People assume that The Slave Ship depicts the Zong massacre which took place in 1781 when Turner was a about 6 years old, but others contest this and assert that the painting is about more contemporary issues.  So, of course this appealed to me because Turner gives us a different way of thinking about history. The play is an ensemble piece so there is no central character.  All the characters play a significant role.

I like all sorts of stories – from the epic to the intimate and domestic. I suppose one of the things I love the most is when you see the raw passion that you can sometimes find in the work of new writers who are still learning the craft.  I dislike the way that small “domestic” plays are talked about as if they are of less value than bigger plays.  Physical scale does not reflect the emotional or political scope of a play.  I like stories that challenge me intellectually, or that prompt me to go off and do my own research into a subject.

One of the things I love best is watching the actors take ownership of their parts, bringing the script to life. They seem to be having a lot of fun with the play – I deliberately embedded song and dance and humour into the script because they are such important aspects of survival.  Song and dance provide solace from trauma, and laughter is bonding and inclusive.

7. Diversity is high on the news agenda with the start of the awards season. What would you say to the argument that there is not enough choice to nominate a diversity of talent?

The choice starts when you commission work from a diverse range of people and stick with them as they develop the work with your support.  No matter how talented someone is their work won’t mature into excellence if it isn’t nurtured.

Absolutely brilliant.  Miranda Cromwell is an accomplished and experienced young director who is fizzing with ideas.  I am very much enjoying the collaboration.

My sister really inspires me.  She is an amazing woman who has taught me the meaning of sisterhood in its wider sense.  She is very loving and supportive.  She is the person with whom I share my first drafts.  She is very honest in that way that younger sisters can tend to be.  When it comes to giving feedback, she takes no prisoners, but I so appreciate it as she has a great ear and good judgement.  As far as writers who inspire me are concerned, I’m not going to name names because I’ll end up leaving someone out and writers tend to be sensitive.  Everything inspires a writer – every single encounter with friends and strangers, everything I observe and experience.  I was a carer to my mother when she had Alzheimer’s.  At the time I couldn’t really talk about what I was going through and took quite a lot of time away from writing to do it.  I was helping her to prepare for death.  It was an intense experience and I realised then that you can’t separate your creativity from your life: they are one and the same thing of course.  A creative person will bring that creative impulse to every experience they have and in turn whatever they’re doing will expand their creativity.

I wrote the play on spec and then my agent sent it out.  Suzanne Bell the literary manager of the Manchester Royal Exchange Theatre swooped it up as soon as she read it and Sarah Frankcom committed to a production.  They then supported me as I developed it.  It went on to win the Alfred Fagon Award soon after that. BY WINSOME PINNOCK. DIRECTED BY MIRANDA CROMWELL.dates.….13 MARCH 2020 – 4 APRIL 2020