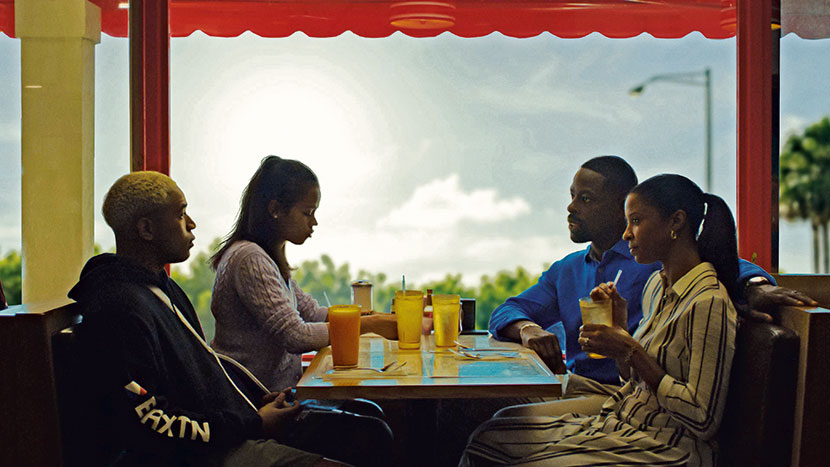 Another film that was shunned by the BAFTAS and Oscars nominations. Waves is Trey Edward Shults’ latest project. It examines masculinity through an Instagram filtered lens, holding a mirror up to its many complexities. In this exploration of love, loss and family dynamics, Waves illustrates the importance of portraying the nuances of black characters. Here we follow the lives of the Williams family, witnessing the ripple effect of sports superstar Tyler’s final year in high school. As what is supposed to be an African American teenager’s coming of age, becomes a chronicle of his demise.

Sterling K. Brown gives a powerful performance, adopting the role of overbearing father, Ronald. As he and Tyler go head to head in training, wrestling becomes a sort of metaphor for the strained relationship between father and son. The shared resentment is palpable, highlighting the dangers of placing high expectations on the shoulders of young men. What ensues can only be described as the consequences of toxic masculinity.

Shults’ experimental approach to film making is somewhat immersive, with spinning shots that leave you dazed and confused. He is committed to his craft, with intoxicating visuals and warm hues throughout. The acoustics amplify this tale of social realism as Trent Reznor (The Social Network, Gone Girl) dazzles us with a score featuring Frank Ocean, Tyler, the Creator and Kendrick Lamar, successfully capturing the zeitgeist of black middle-class suburbia. This new wave dreamy aesthetic interspersed with contemporary rap, truly embodies the spirit of independent film.

Waves presents a road to redemption paved with collective pain and a need for forgiveness. It is nothing if not sobering. As the narrative shifts away from Tyler, we see his younger sister, Emily, played by Taylor Russell, take the wheel. We hold our breath as she embarks on her own journey of self-actualisation. In this homage to Moonlight, we look on as Emily experiences adolescence through green grass, blue waters and pink skies. Some scenes are harrowing, whilst others will leave you numb for days, and some might just make you smile. In the closing scene, Emily rides her bike through the streets of Miami, arms in the air, she is jubilant. Waves is an audio-visual triumph.