The Prince Of Egypt

Described as Achiampong’s first significant solo exhibition ‘When the Sky Falls’, consist of new and existing works, open now at the John Hansard Gallery part of the University of Southampton. Moving image and sculptural works are fused together by childhood memories, using inspiration from African spirituality and how the colonial voice is used in religion.

When the Sky Falls builds on Achiampong’s concept of Sanko-time, a theory at the core of his recent practise. Based on the Ashanti word Sanfoka which translates as “to go back for what has been left behind”.  Sanfoka alludes to using the past to prepare for the future, essentially the wish of being able to go back to an immutable point to make sure what has been lost is no longer lost. Although a new term it reflects resilience from the oldest traumas of the African diasporas. 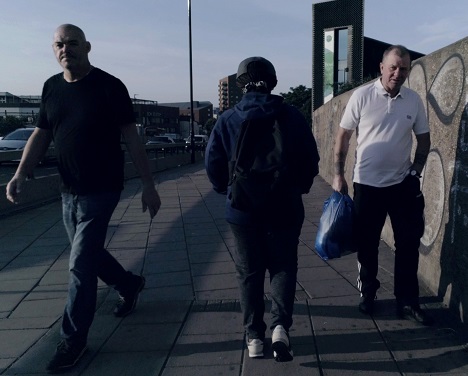 This is a personal voyage for the 2018 Jarman award nominated artist, his solo and collaborative project employs imagery, aural and visual archives, live performance and and sound to explore ideas surrounding the class divide, cross- cultural and post-digital identity.

Achiampong told Alt Africa “The title is a slight reference to nursery rhymes and children’s songs that reference end of days, we are having a tense moment around the planet regarding social issues, environmental issues, political issues and when that tension is felt people kinda call on the question of are we at the end, what does the end mean. So this solo show brings in a collection of works, which touch on the idea of social collapse. Looking at storytelling from the point of view of the lived experience. It has been a taxing challenge to bring something as ambitious as this project”

Two short films breath further life into When the Sky Falls Larry, The Expulsion, 2019 and Sunday’s Best, a short film which addresses the belief systems within the African diaspora and the influence of colonial histories, traditional seating is replaced by church pews and an PAN-AFRICAN FLAG FOR THE RELIC TRAVELLERS’ ALLIANCE, featuring a symbolic colour palette and 54 stars for the 54 African countries.

Talking about the short film The Expulsion the artist added, “At the heart of the film I guess there is a central monologue regarding my own lived experience of having done cleaning jobs with my mother as a child, these experiences brought me to the reality of hard living in London. I experienced poverty as a kid and a lot of the things I learnt some people in the middle- classes, upper classes of society do not see or experience at all”.

Woodrow Kernohan, Director of John Hansard Gallery, says, ‘It is a real privilege to work with artists, curators and communities to respond to our current turbulent times. 2020 is also an opportunity for us to reflect of the legacy of the Mayflower voyage from diverse perspectives. I am excited to share this engaging and interrogative programme that the team has created for the year ahead.’

John Hansard Gallery is an internationally recognised and locally engaged contemporary art gallery in Southampton. Being part of the University of Southampton, the Gallery aims to change the world for the better through great art. To realise this, the Gallery creates innovative and critically acclaimed contemporary art exhibitions, events, engagement and research projects that excite, challenge, represent and reach the broadest possible public audience. John Hansard Gallery is supported using public funding as a National Portfolio Organisation by Arts Council England.