2019 is the 60th anniversary of the death of George Padmore who was born in Trinidad in 1903 and died in London in 1959. Padmore was a leading protagonist in the development of 20th-century Pan-Africanism. His activism in pursuit of colonial freedom was influential in the Caribbean, USA, Soviet Union, Europe, Britain and Africa and led directly to African independence from colonial rule. He became an advisor on African affairs to President Kwame Nkrumah after Ghana’s independence in 1957. Padmore’s Pan-Africanism was deeply rooted in his Marxist analyses and perspectives. Join us for a discussion led by historian Hakim Adi and writer Margaret Busby. 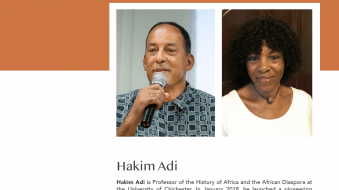 Hakim Adi is Professor of the History of Africa and the African Diaspora at the University of Chichester. In January 2018, he launched a pioneering online Masters by Research programme on the History of Africa and the African Diaspora and is the founder and consultant historian of the Young Historians Project ( http://younghistoriansproject.org/). Hakim is co-editor with Marika Sherwood of The 1945 Manchester Pan-African Congress Revisited (New Beacon Books, 1995). Among his many publications are his recent Pan-Africanism: A History (Bloomsbury Press, 2018) and, as editor, Black British History: New Perspectives (Zed, 2019).

Margaret Busby, OBE, was born in Ghana into a family with strong links to the Caribbean. She became Britain’s youngest and first black woman publisher when she co-founded Allison & Busby in 1967. Margaret compiled the groundbreaking Daughters of Africa (Jonathan Cape, 1992) and its 2019 sequel New Daughters of Africa (Myriad Editions). Among many honours, Margaret has received the Royal Society of Literature’s Lifetime Achievement Benson Medal, the inaugural Africa Writes Lifetime Achievement Award from the Royal African Society and the Bocas Henry Swanzy Award for Distinguished Service to Caribbean Letters.

The George Padmore Institute was founded in 1991 as an archive, educational research and information centre housing materials relating mainly to the black community of Caribbean, African and Asian descent in Britain and continental Europe. The GPI is currently embarking on a three-year plan to strengthen its funding and staff base. We see this as vital for the continuing independent activity of the Institute.