Clarke Peters plays The Master in this new compelling drama on BBC One part of an all star cast.

“This story starts in another world. One that is both like, and unlike, your own. Here, every human soul takes the physical form of an animal, known as a daemon. The relationship between human and daemon is sacred. This world has been controlled for centuries by the all-powerful Magisterium. Except in the Northern wilderness, where witches secretly whisper of a prophecy. A prophecy about a child with a great destiny. During the great flood, this child was brought to Oxford.”

Dafne Keen stars as the young protagonist Lyra, who lives in Jordan College, Oxford. Placed there by her uncle, Lord Asriel (James McAvoy) she lives a sheltered life amongst the scholars and college staff under the watchful protection of The Master (Clarke Peters) and Librarian Charles (Ian Gelder). 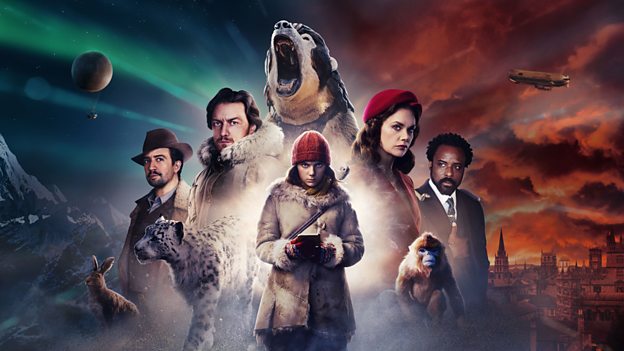 When the glamorous and mesmeric Mrs Coulter (Ruth Wilson) enters Lyra’s life she embarks upon a dangerous journey of discovery as she travels from Oxford to London. Here she meets Father MacPhail (Will Keen), Lord Boreal (Ariyon Bakare) and journalist Adele Starminster (Georgina Campbell) at a glittering society party where she learns of the sinister ‘General Oblation Board’.

Who is The Master?

The Master of Jordan College, which is one of the many colleges at Oxford. For those who don’t know anything about the book, or if you know nothing about me, I’m going to start from the beginning. This is a book about a young lady who’s coming of age at a time and a dimension that’s not dissimilar to here, although there’s some technology that does afford her an interesting passage to the future.

That little instrument that she uses to tell the future is something that she received from myself. We deal with science, theosophy, theology and philosophy at Jordan College, I would imagine, although it’s not quite stated as such. It’s a conversation between church versus state, spirituality versus politics, adolescence versus maturity. My character is pretty much the guardian of young Lyra and has to pass these notions down to her alongside her uncle Lord Asriel.

Earlier on in the book we see him give Lyra the alethiometer, but also he appears to be trying to poison Asriel. Is he a good guy or a bad guy?

That was my question as well. You don’t know whether he’s a good guy or a bad guy. You don’t know whether he’s doing things for the protection of his charge, of the young girl, or whether he’s doing it for the protection of the universe: in order to save the world, you might have to sacrifice one person. In the book and in our show, it’s a difficult decision. It would be a difficult decision for anyone to make. That’s an interesting element in the storytelling because you don’t know, you have no idea. I don’t think it would be accurate for me to put a spin on that right now because it could spoil it for someone else. This is an ongoing saga so the story moves on without him: we don’t know whether he will show up again in the future or not.

Catch up on BBC iPlayer or BBC One Sundays at 8pm from 3rd November.

New episodes of the Playwright’s Podcast