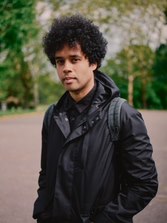 Johny is a writer, photographer and broadcast journalist. He has received various awards for his work exploring Afro-European identity, including a Decibel Penguin Prize and an ENAR (European Network Against Racism) award.

“It seems a typically American story. In 1930 a fourteen year old girl, only a generation or so away from her enslaved ancestors, leaves the inequity of the segregated south working as a sharecropper, to join the Great North migration searching for a better life in New York. She achieves her mission, and lives and dies in Brooklyn, a place Teju Cole calls ‘One of the world’s great African cities’. That girl was my Grandmother, my second name, however, is not American, but English. My lecture will make the connection between American slavery and Europe in an attempt – to quote Afro German scholar Fatima El Tayeb – to challenge ‘the powerful narrative of Europe as a colour-blind continent, largely untouched by the devastating ideology it exported all over the world”.

As part of an ongoing project, Johny founded and curates the award-winning online journal Afropean.com, an online multimedia, multidisciplinary journal exploring the social, cultural and aesthetic interplay of Black and European cultures, and the synergy of styles and ideas brought about because of this union.

Johny Pitts said: “As a northerner with enslaved people in my ancestry, it is an honour to engage with the powerful work happening in Liverpool. It is work that asks us to enter the lives and struggles of those woven out of so many historical narratives, and face up to a legacy that persists in current global power structures”.

He will be delivering a lecture in Liverpool on Thursday 22 August starting at 6pm at the events space on the fourth floor of the Merseyside Maritime Museum, making the connection between American slavery and Europe to challenge existing narratives.

The lecture is free but booking is essential, and places are limited. Tickets are now available from Eventbrite:
https://bit.ly/31wRnkv