In 2018 Cinema Rediscovered screened the cult classic film Just Another Girl on the IRT made over 25 years ago by the female Director Leslie Harris who wrote, directed, produced Just Another Girl on the I.R.T. as an independent feature through her production company (Truth 24 FPS Inc.) which sold the feature to Miramax, a first for a theatrical film by an African-American woman. The film premiered at Sundance in 1993, where Harris became the first African-American female writer, director, producer to win a Special Jury Prize for Best Feature Film. Made on a budget of $130,000, Harris’ film follows Chantel, a smart, articulate black high school student, determined not to become ‘just another girl on the I.R.T’ (the NYC subway train). 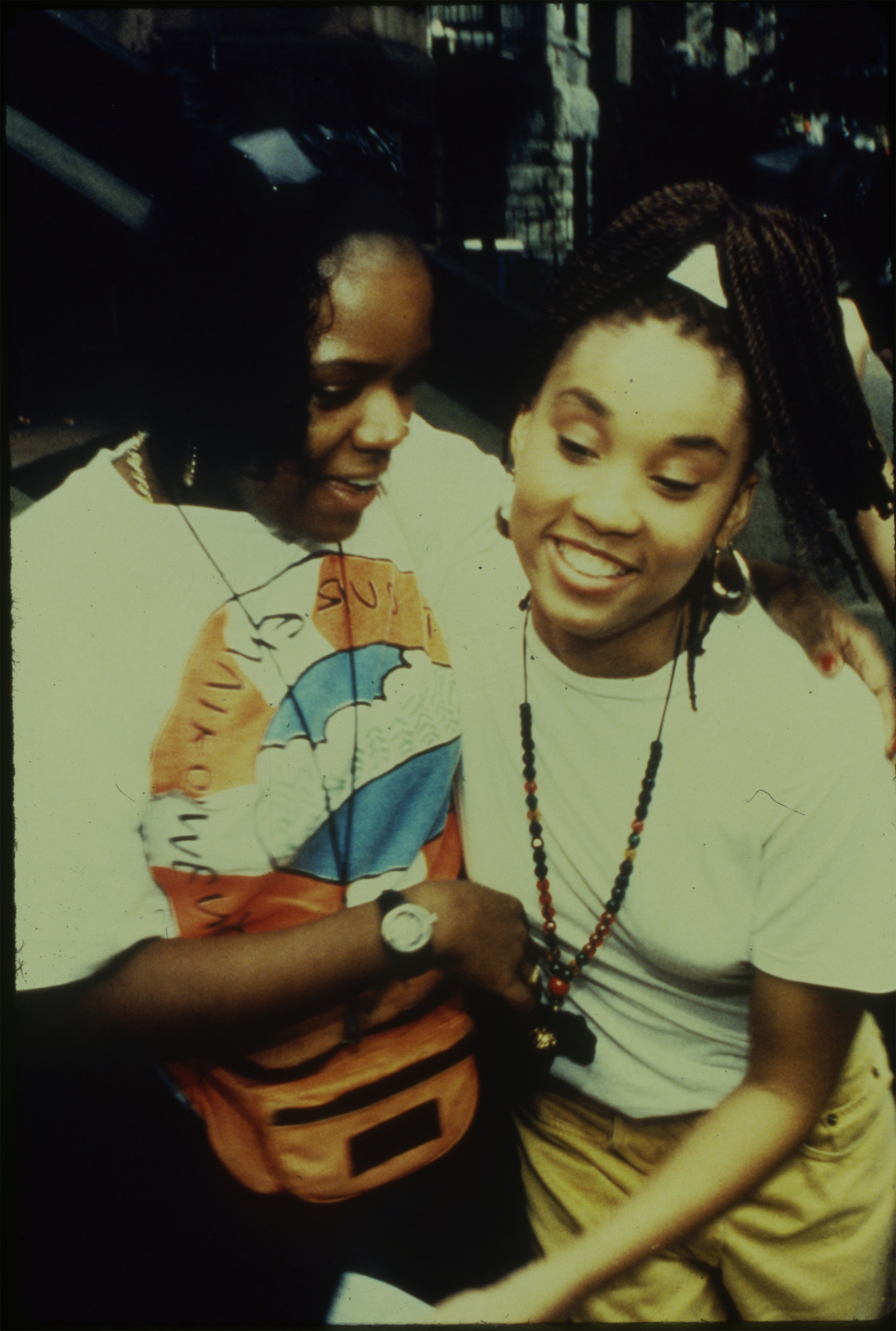 In 1993, it was released in cinemas across the US and 20 countries worldwide, and became the first film by an African-American woman to gain British distribution.

25 years on, Leslie Harris reflected: “It’s still a challenge for black women as writers, directors and producers. Yes, today we have Ava DuVernay and Dee Rees and that’s progress, but it’s not enough. Audiences are still missing out on many wonderful stories by black women filmmakers.  Financing is still a challenge, including for me making my current feature ‘I Love Cinema’. 25 years ago when I picked up my Sundance Prize, I said “… it’s time to see the independent vision of African American women both in front of and behind the camera”. 25 years later, I say it again. The time is now.”

Alt A caught up with Leslie Harris after the screening at the BFI. This interview appeared in the winter edition of Alt A Review.

AA: Thank you so much for taking the time to talk to us. First question I wanted to ask you…I recently read in The Guardian that you said at the time you made the IRT that Hollywood was embracing Black men. Can you explain that please?

Leslie Harris: Well, you know, Hollywood was embracing men in general and at the time in the 1990s there was a renaissance of Black films and it just tended to be more Black male filmmakers: Spike Lee, Ernest Dickerson, John Singleton, you know, we could kind of rattle off names. Julie Dash did Daughters of The Dust, me, and then after that you know like Kasi Lemmons, Gina Prince-Blythewood, but you know, we weren’t given the same media attention as the guys were, and we didn’t get the opportunities that the males were getting, the Black males. So, I feel, I think, that it’s difficult to be a Black filmmaker, period. I think that kind of supersedes everything, and then being a Black woman filmmaker is challenging.

So..I was teaching at the NYU, and that was like in 2005, and I asked, “Can you name any Black women filmmakers?”, and they couldn’t. No one raised their hands in 2005, and I think that showed that Black women weren’t really getting the publicity or the recognition or the notoriety. Even screening this film at the BFI, people were coming up and saying, “Why didn’t I know about this movie?” so I think a lot has to do with that. It’s that the Black males were getting more attention,  more media coverage, and Black women weren’t.

AA: In terms of the industry, being Black, and being a woman? What has that experience been in terms of how you experience Hollywood?

LH: I think the thing is that you can’t really separate it. Because after I did “Just Another Girl on the IRT”, when I would go to meetings, with executives, at the studios, first of all they would look at me because most of the executives were white, and they were looking at me and they were saying “You’re a filmmaker?” “Did you really write this?”. It sounds incredible that people were saying that, but that is what I encountered, and so I can’t really separate myself from…I have a different kind of philosophy and I think everyone has to have a different philosophy because it’s a personal journey as a filmmaker…I don’t mind being called a Black Woman Filmmaker because I grew up – I was saying in the Q&A at the BFI – with farm movies, you know, Black Girl, just all different types of directors and movies, and I feel uniqueness is important. I don’t want to be homogenised, and I think my film kind of reflects that, being unapologetically Black. Chantel is who she is, and even in the soundtrack, I was saying that in the Q&A at the BFI, after the screening, that a lot of the films back then were like, doom and gloom, and I wanted to say, even in the soundtrack, “This is my life and it’s just all right”. That was part of the creative aspect of stating that: “Be proud of who you are”, I mean, it’s fun being a teenager, it’s fun being a teenager in the projects, it can be fun! Yeah it has challenges, we all have challenges, we are human beings first, and I get it sometimes it’s all about doom and gloom, there are people in the projects who care about their children, who care about their families, and they’re doing the best they can in economic situations that were kind of forced upon them. So, I tried to just really highlight the fact that, you know, even in the film when Chantel talks about Africa and the maps, and we aren’t depicted fairly in some of the maps you see or wanted to have natural hair…at the time that was kind of a big thing because most people didn’t have the Afrocentric idea of being curious about the culture. “where we came from? where Black Americans came from?” and that was very important to me.

AA: What I liked about Chantel is that, as you were saying, she is very real, she was like very un-apologetically herself, but despite all she was aspirational. Why do you think it was important, especially because as you mentioned they wanted to cast a drug dealer as her love interest?

LH: I think it was important to me because I wanted to see Chantel as a human being, and I remember when the film was shown at Sundance, we won the Special Jury Price there, and a woman asked a question: “ I don’t understand, why Chantel would want to be a doctor?” and I said “I don’t want to be existential on you, but why somebody wants to be anything?” I mean, this comes from being a human being and if you are an artist is something that you want to be, you don’t have to have examples…your father doesn’t have to be a doctor, your mother doesn’t have to be a lawyer, to want to be that. So it was important to me that this young woman could have dreams and aspirations, just like…when I grew up, you know, it was funny when I grew up, after my mother passed away, I was cleaning up the attic and I went through a notebook, an old school notebook and I guess the theme was “What do you want to be when you grow up?”, and I said I wanted to be a director, and I didn’t even realise that I said that. I was shocked when I read that. So, you know, my father wasn’t a director, I didn’t know anybody in Hollywood. So, I feel that, to answer your question, that having ambitions is something that I think is intrinsic in a lot of people, you don’t have to come from a certain background to want to have that ambition.

AA: So, in terms of directors, you know, we’ve got Ava DuVernay, Dee Rees, at the moment they’re doing well. And obviously we’ve got like Ryan Coogler, “Black Panther”…so how much do you think things have changed in the past 10 years? It seemed like an acceleration of all these Black directors, you know, coming out of nowhere?

LS: Yeah I agree with you. Just recently Boots Riley right? I feel like there’s a resurgence. In the 1990s there was that kind of resurgence, but it was more Black male directors that kind of got all the attentions we were talking about. Now there’s a resurgence and we’re seeing Black women being included, and especially in the theatrical ground. That’s the challenge that I had after doing my movie: the industry was very white, both in front of and behind the camera – and you can see we were asked ourselves “Why?” – and I think it helped a lot when people like Jada Pinkett-Smith, when people like Snoop Dogg said “Look, this is not right” and at the time they were kind of ostracised a bit by some people, like “Why are you saying that?”. Some of the great film actresses, I remember that I liked Charlotte Rampling, I don’t know if you know who she is…but she’s been in a lot of classic movies, and when she came out and said “Why do you need answers? Why is that validating you guys? That is not really that important” I was like really hurt because I loved her acting and I was like “What? It’s ok for white actors to get answers, but we don’t get answers?” so it was important that we had people who spoke out, like Jada Pinkett-Smith and Snoop Dog, but there were other people who spoke out and said that that wasn’t right, and sometimes we need that to make a change. And now the Academy is admitting that they were wrong, that they did exclude people, and now they’re including more members of diversity and POC, and I applaud them for doing that but someone had to point out the problem, and sometimes it’s up to us not being so afraid – “I’m not gonna get a job”, or “It’s not completely correct” or “I’m gonna be ostracized” – to me the truth is important, and that’s how we make a change.

Review – Black and Blue: World premiere of The Black Cop: An Officer Atones His Past

The Black Cop: An Officer Atones His Past