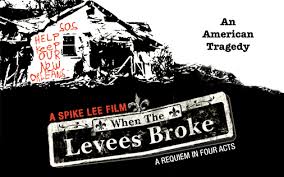 In August 2005, over 8 days Hurricane Katrina ripped through New Orleans killing almost 1,300 people in the process. Being identified as one of the most deadly hurricanes in American history.  This forms much of Spike Lee’s seminal documentary: When the Levees Broke: A Requiem in Four Acts is a 2006 documentary film directed by Spike Lee about the devastation of New Orleans, Louisiana following the failure of the levees during Hurricane Katrina.

The ‘Spike is 60’ film festival has shown a variety of Lee’s work this year celebrating the 60th birthday of the African- American director.

We Are Parable Co-founder Anthony Andrews said. “It is such an important story to tell; seeing how New Orleans residents were not even given simple provisions like food and water”.

Talking to “I am Samuel” Director Peter Murimi